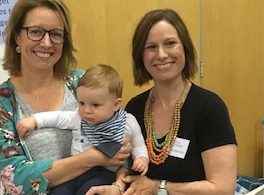 When I first contacted Emma I was desperate. My 14 week old baby boy was waking to feed up to 6 times through the night and often needed to be resettled 2 to 3 times in between feeds. I was lucky to get up to an hour of sleep at a time. I resorted to co-sleeping most nights just to get some rest, but I was absolutely exhausted. I was trying to follow a routine, but I was having to resettle him numerous times during his day sleeps too. I had to pat him to get him off to sleep and to get him to resettle both day and night, and it was very rare that he’d go to sleep on his own and without crying. Being my second baby I thought I’d have no troubles, my first had slept through from 9 weeks, but I had started to really feel out of my depth. The first time I spoke with Emma it was obvious that she knew what was she was talking about and that she genuinely cared about helping her clients (both the babies and the parents)! Emma was so supportive, gave very clear and achievable guidance, and was always happy to work through my questions and concerns. It was such a relief to have someone hold my hand and guide me out of the fog! My little man has responded so well to Emma’s methods. The changes have been amazing! Within a few days he was self settling, with no tears, for every sleep; and he was having proper day sleeps, including a long lunch nap, without needing to be resettled! Our nights are hugely different now too. I only get up to feed him once or twice and if he goes back in his cot awake, he just settles himself back to sleep. He keeps hitting personal bests for how long he is going between feeds overnight! More importantly he’s having really good feeds now, instead of snacking like he was before. I am just so proud of him. Our routine is working reslly well and bedtimes are never an issue. I finally feel like I know what I’m doing again, and it’s all thanks to Emma!